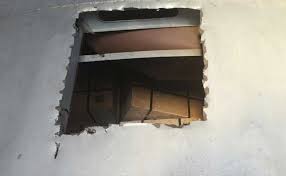 Closed Circuit Television (CCTV) systems are already in place in three coaches, including one air-conditioned coach and a ladies compartment in the zone under the ‘Rolling Stock Programme’ of the Indian Railways. A massive programme to bring all major railway stations under CCTV surveillance is also under way.

“This incident (robbery) has prompted us to review the procedures involved in the loading/unloading of currency consignments. Since there is a provision to install cameras in rolling stock, we are thinking of installing CCTV in parcel vans carrying high-value consignments,” a senior railway official said on Monday.

According to him, permission was being accorded to the Postal Department (Tamil Nadu Circle) for installing surveillance cameras in parcel vans to prevent thefts. Transportation of currency notes by trains was a safe and time-tested practice over the years. Even the Currency Note Press in Nashik engaged railway coaches for movement of cash.

“We only deploy some additional security features which are imperative when currency consignments are booked. But in this case, we were not aware of the huge cash movement till the theft came to light. Though 23 tonnes of soiled but usable currency worth Rs. 342.75 crore were loaded, the value of the consignment was not declared,” the official said.

In Ernakulam, from where the parcel van was moved to Salem via Coimbatore, the official said CCTV footage had captured the roof of the van that was found to be perfect. “Going by preliminary reports we understand that the roof was not tampered with when it was cleared for operation from Ernakulam. Moreover, before loading the currency boxes at Salem, the consignor party inspected the van and found nothing unusual,” an official said.

Meanwhile, an internal inquiry of the Railway Protection Force has revealed that the armed escort police personnel of the Salem city police were guarding the cash-laden van till it was opened by RBI officials almost seven hours after it reached Chennai Egmore at 4 a.m last Tuesday.

“After the train arrived in Chennai Egmore, the cash van was shunted and taken to the yard at Gopalsamy Nagar. The engine driver has given a statement that two armed policemen were in the engine. Even when the coach was stabled in the yard for about two hours, the escort police took turns to be in the vicinity,” a railway official said.

On the progress made in the case, a senior investigator of the Crime Branch CID of the State police said no specific clue that could lead to a breakthrough in the case had emerged yet.

Parrying questions on technical input, he said the agency was still analysing mobile phone calls of suspects and numbers that were active in certain places.