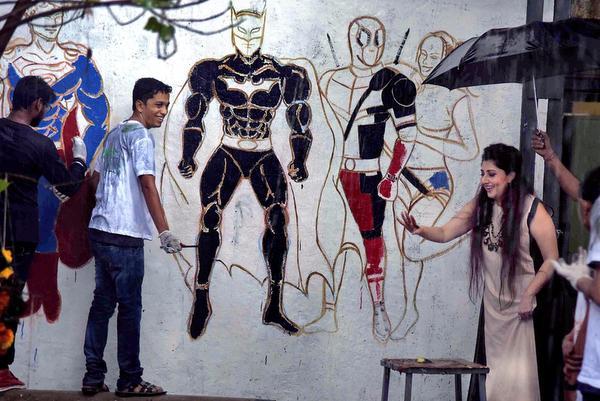 Over the past week, about 25,000 volunteers have worked through the night to give Mumbai’s local train stations a colourful facelift, since October 2, as part of ‘ Hamara Station , Hamari Shaan ’, a joint initiative by non-governmental organisations Make A Difference (MAD) and Mumbai First.

In the first leg of the station beautification drive, Borivali, Khar and Matunga were given a makeover in December 2015. This time, 36 stations — 21 on the Western line and 15 on the Central line — have been renovated.

“We are mural art students and we have learned about wall painting in college, but we realised how exactly this works after we started working here. We have received tremendous support from the college staff, and some of our teachers would come with us personally and spend the entire day here painting pillars and counters,” said Drishti Kapoor, who was part of a seven-member group from Shreemati Nathibai Damodar Thackersey (SNDT) Women's University that spent 12 hours painting Mumbai Central station, while students from Sir Jamsetjee Jeejebhoy School of Art beautified Mulund station.

While colouring the steps of Kurla station, Ronak Gupta from Don Bosco College shared his experiences juggling work and college during the drive. “We have projects to finish, so most students were a little hesitant to come here. But this is the need of the hour. When we heard about this initiative and that we could contribute, my friends and I requested our teachers to extend our submission dates,” he said.

Apart from students of art, artists from tribal groups in Dahanu, Purvi Art Institute, and foreign artists also took part in the makeover drive. Stations have been painted with various themes such as history, music, education, women empowerment, and marine life. Some have showcased their Warli and Madhubani art at certain stations.

The last two days of the drive have seen volunteers go beyond art. Students of Karamshibhai Jethabhai (KJ ) Somaiya College, for instance, have collected funds to spruce up toilets, while employees of firms such as Kalpataru and Edelweiss have volunteered as part of their organisations’ Corporate Social Responsibility