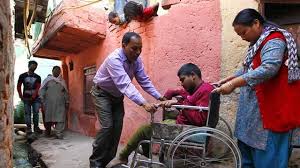 KOCHI: The Railways’ much lauded initiative to issue over 15,000 ID cards to the differently-abled for facilitating online reservation with concession has evoked an overwhelming response. After the Railway Board launched the scheme last year--which allows physically challenged persons to book tickets at concessional rates across PRS counters as well as e-tickets through IRCTC websites, besides unreserved tickets at concessional rates via the Unreserved Ticket System (UTS) counters on the basis of Photo Identity Cards to be issued by the Railways, Thiruvananthapuram and Palakkad Divisions received around 15,446 applications.

However, despite some of the ID cards being made available by the Railways, they could not be issued since the applicants were unable to collect them, officials said. They were also informed of the same through telephone, but to no avail.Following this, the ID cards prepared at  Thiruvananthapuram and Palakkad Divisions have now be taken to the various stations near the applicants’ residential address and the Dy Station Managers (Commercial) would be issuing the ID cards. The applicants may contact  Deputy Station Manager (Commercial) at Nagercoil Junction, Thiruvananathapuram Central, Kollam Jn, Alappuzha, Ernakulam Jn, Kottayam and Thrissur.

The officials also said that the Railways will accept fresh application for the ID cards. And physically challenged persons entitled for railway concession should approach the nearest office of the Divisional Railway Manager (DRM) with all the relevant documents--Concession Certificate, Photo ID proof, Date of Birth proof, Address proof and two passport size photographs either in person or by post for  securing the Railway Photo Identity card by submitting one set of attested photocopies (self-attested) of the aforesaid documents.
The passenger will have to carry the Photo Identity Card in original during the journey and shall be required to produce the same for verification during on board/off board checking. The validity of the card will be five years from the date of issue or till the last date up to which the concession certificate is valid, whichever is earlier. In the event of misuse/ fraudulent use of the card, Railways shall block the Card.