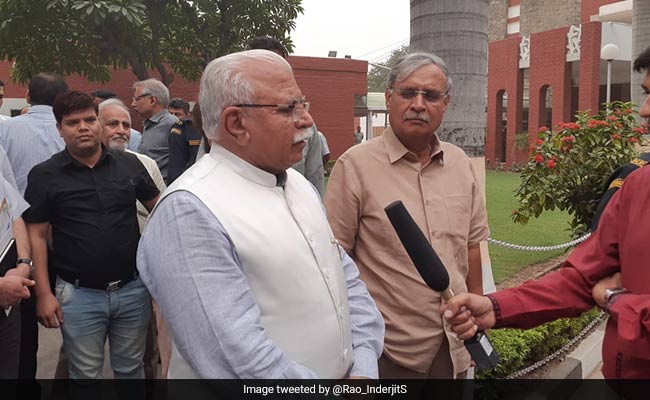 The Haryana government on Friday gave its nod for a high speed rail network between Sarai Kale Khan in Delhi to the Haryana-Rajasthan border near Shahjahanpur-Neemrana-Behrod.

It was among the several other decisions taken in a meeting chaired by Chief Minister Manohar Lal Khattar in Chandiharh. Union Minister of State for Planning, Rao Inderjit Singh was also present.

The Regional Rapid Transit Systems (RRTS) project will provide a new impetus to the growth and investment in Gurgaon specifically and to south Haryana in general, Mr Khattar said.

The project will run along an elevated section on the Old Delhi road in Gurgaon to Lt Atul Katarya Chowk proceeding to Signature Tower Chowk and then along NH-48 up to Rajiv Chowk, an official release said.

Thereafter, it moves underground beyond Kherki Daula where it would emerge above the ground up to IMT Manesar. The alignment would move along the highway up to Dharuhera, Rewari and Bawal before entering Rajasthan, it said.

The average speed of the rail will be about 100 Kilometre. It will provide a convenient mode of travel for daily commuters from southern Haryana to Delhi.

The first phase, being built at a cost of approximately Rs. 25,000 crore, will end at Shahjahanpur-Neemrana-Behrod.

The project will be executed by NCR Transport Corporation (NCRTC), a joint venture of the Government of India and the States of Uttar Pradesh, Haryana, Rajasthan and Delhi.

The NCRTC will prepare the Detailed Project Report (DPR) in three months and physical work is likely to start by March 31, 2019.

Meanwhile, the project to provide connectivity from Huda City Centre up to Gurgaon railway station was also discussed in the meeting.

It was decided that connectivity to Old Gurgaon will also be ensured by extending the connectivity along the Sheetla Mata Road up to Rezangla Chowk and towards Sector 21-Gurgaon completing the loop with the RRTS project coming up on the Old Delhi road.

In addition, a metro project will also be planned along the Dwarka Expressway up to Sector 21, Dwarka.

For this, a techno-feasibility study will be carried out by Haryana Mass Rapid Transport Corporation Limited (HMRTC).

The two lines will be connected along the new road proposed to be constructed by Gurugram Metropolitan Development Authority (GMDA) along Sector 101/104 dividing road from Basai Chowk.